The next exciting development in the regeneration of Galashiels is a step closer as work gets set to start on creating the Great Tapestry of Scotland visitor attraction.

Stirling-based Ogilvie Construction has been appointed to build the landmark facility for the attraction, which tells the story of Scotland through one of the world’s largest tapestries created by 1,000 people from across the country.

Work is expected to start in the coming weeks at the town centre site, which will be transformed with the creation of the new building. It has been designed by one of Scotland’s leading architectural practices, Page \ Park, with new images of what it is expected to look like now available.

The visitor centre – which is accessible from Edinburgh in less than an hour via the Borders Railway - will have a wide range of interactive displays and activities. There will also be exhibitions and events for tourists and locals alike, as well as a gift shop, café with local and seasonal produce, and educational facilities for all age groups.

The Great Tapestry of Scotland – which will be managed by charity Live Borders - will kickstart a new future for Galashiels, alongside a number of other projects which will provide a host of benefits for the town and the Scottish Borders.

These include the new town trail which will include a sculpture dedicated to Galashiels sweet seller Robert Coltart who wrote the world famous children’s lullaby Coulter’s Candy (Ali Bali Bee). Significant improvements to the town centre are currently being taken forward in partnership with community groups, and a masterplan which aims to transform Galashiels and encourage investment in the wider Borders economy is being progressed. 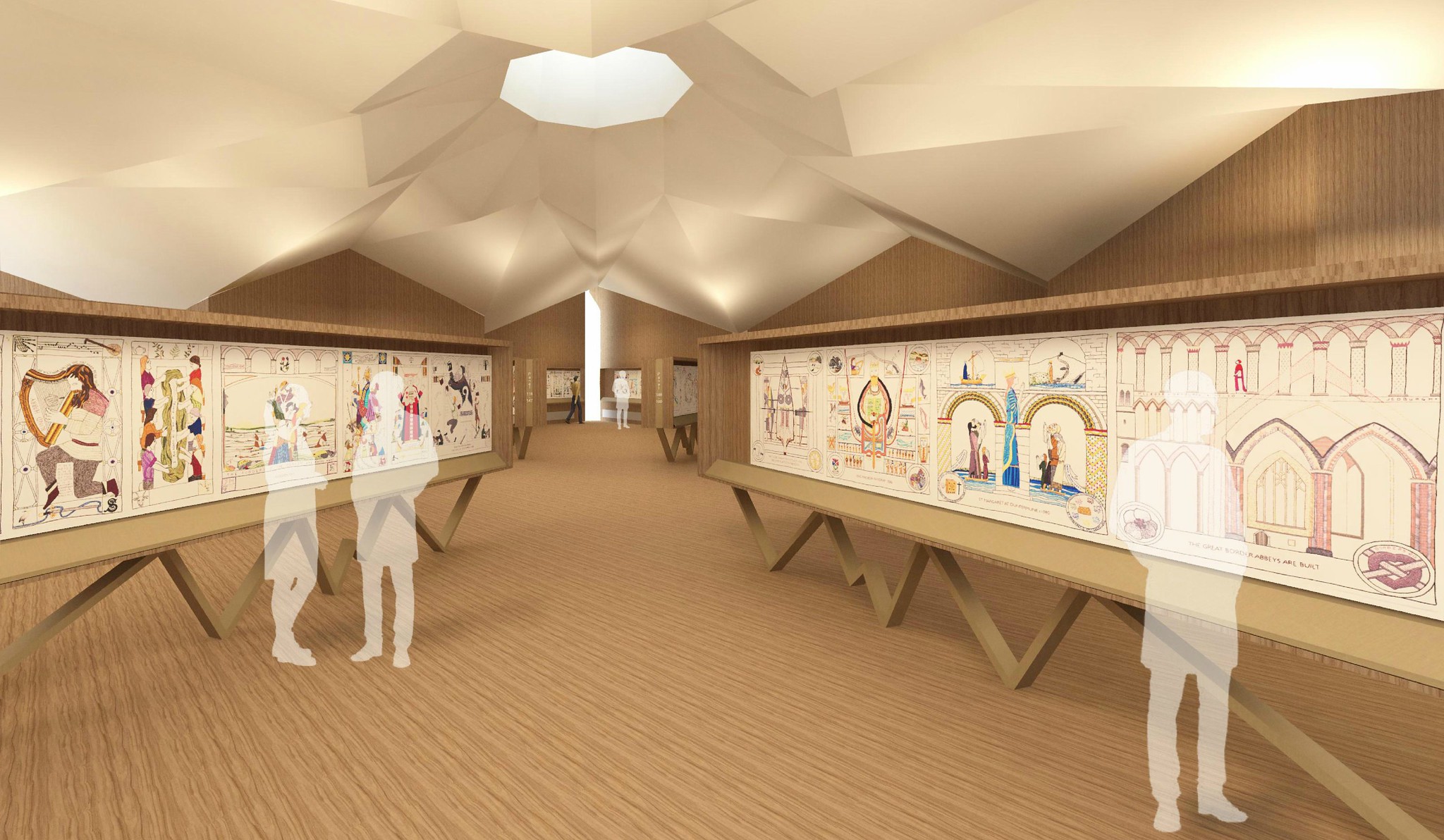 Councillor Mark Rowley, Scottish Borders Council’s Executive Member for Business and Economic Development, said: “This is a hugely exciting time for Galashiels and the Scottish Borders.

“I am delighted we now have an experienced and trusted contractor in place to take forward the building of this nationally significant attraction, with the artist impressions indicating it will be a stunning piece of architecture in Galashiels town centre.

“Jobs will be created during construction of the facility alongside a wide range of social, economic and educational benefits once the building opens to the public.

“Heritage and culture experts predict the centre will attract over 50,000 people to Galashiels each year once opened, as well as create 16 new jobs at the facility.

“In addition, almost £900,000 of extra spending per year is predicted for the local economy, providing 12,000 extra visits to complementary attractions, supporting a further 17 jobs.

“The Tapestry is the first stage of a wider masterplan to regenerate Galashiels, which is starting to see encouraging developments such as the expansion of local estate agents Cullen Kilshaw into the Transport Interchange and positive community feedback on the Coulter’s Candy sculpture.

“With the Jim Clark Museum set to open this year, a £1.3million Hawick Conservation Area Regeneration Scheme being announced this month and continued investment in key Scottish Borders events, there are more and more reasons for people to come to the Scottish Borders.”

SBC’s Chief Executive, Tracey Logan, said: “The Tapestry project partners have been working collaboratively to get to this stage and it is excellent to reach this milestone.

“While the newly appointed construction team makes plans to start in the coming weeks, we will have a number of tourism professionals from the Live Borders’ team attending VisitScotland’s premier business to business travel trade event Expo this week.”

Jane Hogg, Director of Commercial Services for charity Live Borders, added: “Expo offers the perfect opportunity for us to showcase this new attraction, and Galashiels, to potential buyers from all over the world. It is the first step in bringing this exciting, dynamic and engaging new attraction to the tourism sector.”

Alistair Moffat of the Tapestry Trustees added: “The Great Tapestry of Scotland is an object not only of great beauty and power, it will also act as an engine for renewal.

“As large-scale retail moves to the periphery of towns and cities, it is magnetic cultural attractions like the Tapestry that will bring back life to the centres of these beautiful places.

“The huge success of the V&A in Dundee, attracting 500,000 visitors in six months, doubling estimates, is only the latest example of how well this strategy works.”

Donald MacDonald, Managing Director, Ogilvie Construction, said: “We are delighted to be part of such a prestigious initiative for Galashiels and the Borders. The new visitor centre will be built to the highest standards creating a first class facility and we will look forward to engaging with the local community throughout the construction period.”

Mike Gray, Chairman of community group Energise Galashiels Trust, added: “We are thrilled to support the Great Tapestry of Scotland project and look forward to watching as things progress over the coming months.”

Ogilvie Construction is part of the Ogilvie Group, one of Scotland's most consistently successful family owned businesses. The company is over 65 years old and employs over 550 people across its various business operations.

More information on VisitScotland Expo is available at www.visitscotlandexpo.com.

• The regeneration of Galashiels aims to capitalise on the success of the Borders Railway, which has presented a series of opportunities for Galashiels and the Borders, with the area seeing an increase in visitor figures

• A partnership approach, including Scottish Borders Council, Energise Galashiels Trust, Live Borders and businesses and community groups, will aim to do this through a series of initiatives which will create a number of economic, social and educational benefits to transform the town

• The Great Tapestry of Scotland visitor centre will be the catalyst for a wider masterplan to re-shape the town and encourage investment in Galashiels and the wider Borders economy.

• It is predicted to attract over 50,000 people to Galashiels each year once opened, as well as creating 16 posts at the facility. In addition, almost £900,000 of extra spending per year is predicted for the local economy, providing 12,000 extra visits to complementary attractions, supporting a further 17 jobs.

• More information on the Coulter’s Candy sculpture is available here.

• The regeneration of Galashiels has the support of the Scottish Government through the Borders Railway Blueprint programme, as well as community groups such as Energise Galashiels Trust.

Updates are being provided at www.scotborders.gov.uk/galashielsregeneration