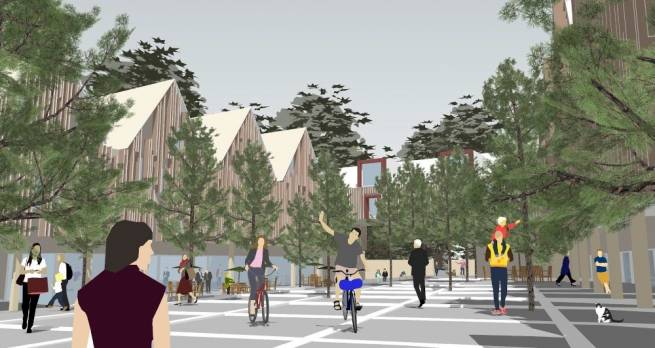 Work has begun on a new business park which will provide a major economic boost to the Scottish Borders and has the potential to create over 380 jobs.

Ogilvie Construction started site operations for the ambitious Borders Innovation Park in Tweedbank this week, which will see four sites developed initially as part of the first phase. Work had originally been due to begin in March but was postponed until this month due to the Coronavirus lockdown, in line with the Scottish Government’s roadmap for the return of the construction industry.

The £29million development aims to deliver much needed high quality business space in the Borders, stimulate business growth and improve inward investment opportunities. As well as predictions that the new park will help create over 380 jobs, it is estimated it will generate Gross Added Value (GVA) of £350million over 30 years and offer a £16 return for every £1 spent.

The Borders Innovation Park is a key component of the Tweedbank Masterplan, a transformational prospectus which has the potential to create over 1,400 jobs across various sectors. It includes a number of ambitious ideas to encourage people to live, learn, visit and work in the Borders, as well as attract inward investment through public and private sector funding. The first phase of the Innovation Park is expected to be completed by August 2021, with Ogilvie Construction also contracted to complete phase two of the project. A third and final phase of the Innovation Park is also scheduled to take place, with revised completion dates for phases two and three being finalised.

Councillor Mark Rowley, SBC’s Executive Member for Business and Economic Development, said: “We have experienced one of the most testing periods of time in living memory, with the local economy in the Borders being significantly impacted.

"As a result, seeing a major development such as the Borders Innovation Park now get underway is hugely welcome news. The Council recognises the potential of the Borders Railway for transforming our area’s economy by bringing new workers, homeowners, businesses and visitors to the region."

"The Borders Innovation Park will aim to capitalise on this once-in-a-lifetime opportunity at a site right beside the railway. We are confident the Park will deliver high quality, higher paid jobs for the Scottish Borders."

Cabinet Secretary for Transport, Infrastructure and Connectivity Michael Matheson said: “As we look to our economic recovery, we are working with partners, to understand how best to move forward and respond to current circumstances. City Region Deals will be crucial to drive growth through projects that deliver significant and lasting benefits for individuals, businesses and communities across the country.  Borders Innovation Park is a great example that builds on the huge success of the Borders Railway and I’m delighted to see it progressing.”

Donald MacDonald, Managing Director Ogilvie Construction, said: ”We are delighted to start construction work in line with Scottish Government guidelines. We look forward to handing over a first class facility which is built to the highest standards and will play such a significant role in economic development for the Borders.”

The Borders Innovation Park is being funded by Scottish Borders Council, Scottish Enterprise and the Borders Railway Blueprint programme, as well as a £15m investment secured from the Edinburgh and South East Region City Deal.