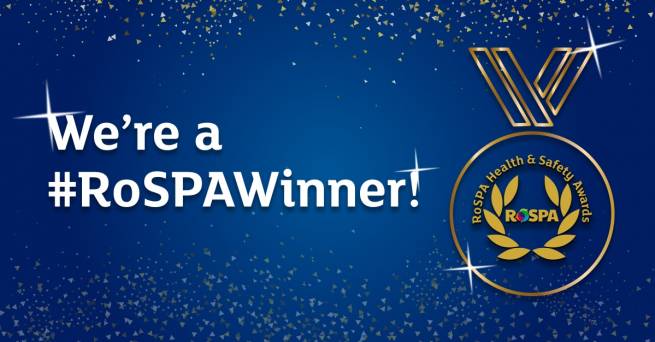 Ogilvie Construction is celebrating after landing an internationally-recognised award for demonstrating high health and safety standards for the seventh consecutive year.

Ogilvie has received a RoSPA Gold Medal Health and Safety Award for working hard to ensure its staff get home safely to their families at the end of every working day.

Organisations receiving a RoSPA Award are recognised as being world-leaders in health and safety practice. Every year, nearly 2,000 entrants vie to achieve the highest possible accolade in what is the UK’s longest-running H&S industry awards.

Donald MacDonald, Managing Director, Ogilvie Construction, said: “This award once again recognises our commitment to maintaining consistently high standards of health and safety across all areas of our operations. Safety is at the heart of everything that we do and we are delighted to receive our seventh consecutive gold award.”

Julia Small, RoSPA’s head of qualifications, awards and events, said: “The RoSPA Awards scheme is the longest-running of its kind in the UK, but it receives entries from organisations around the world, making it one of the most sought-after global accolades in health and safety.

The majority of awards are non-competitive and mark achievement at merit, bronze, silver and gold levels. Gold medals, president’s awards, orders of distinction and the Patron’s Award are presented to organisations sustaining the high standards of the gold level over consecutive years.

Ogilvie Construction is part of the Ogilvie Group, one of Scotland's most consistently successful family owned businesses. The company is over 65 years old and employs more than 600 people across its various business operations.