OGILVIE Construction has handed over the key to a revitalised hospital in north east Fife.

Adamson hospital ­ and the adjoining Cupar Health Centre - were extended and refurbished in a £10 million project by Ogilvie, working for NHS Fife.

At a special ceremony to mark the completion of the redevelopment, Arthur Morris, the chairman of Glenrothes and North East Fife Community Health Partnership, accepted a giant key to the hospital from Martin Lalley, contracts manager at Ogilvie Construction. 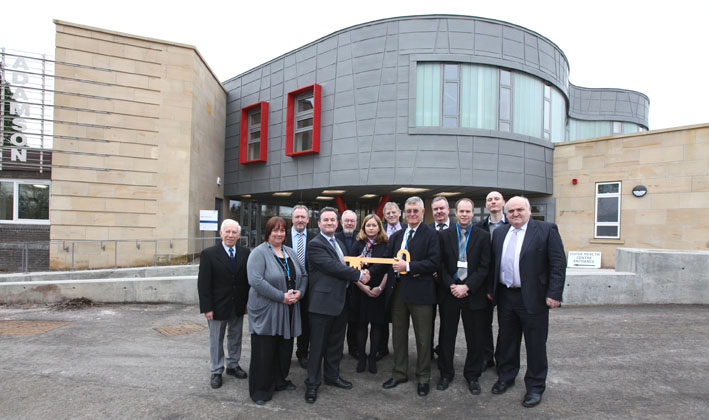 Mr Morris said: "I am delighted to see the new Adamson Hospital coming to fruition. The superb redevelopment of the old hospital, with the additional new build, will provide improved facilities which will be an asset to the local community."

Mr Lalley added: "This was an exciting project for us and we're really pleased with the final results. The hospital continued to operate during the construction phase. It was therefore essential that we had a good working relationship with NHS Fife, as we were delivering a building in a Œlive environment¹. We hope the new-look facilities at Adamson will prove popular with local people."

The redevelopment works, which were completed in two phases, allow a wide range of health services to be delivered in modernised and enhanced facilities.

The upgraded health centre is already occupied by local GP practices, whilst the outpatient department, treatment room and minor injuries services have been operational since July 2011. Remaining services, which temporarily relocated to nearby Stratheden Hospital during the redevelopment work, are expected to move back to Adamson shortly.

The hospital was named after Alexander Adamson, who left money in his will to set up a village hospital in Ceres, near Cupar. The Adamson Institution was opened in 1877. It the early 1900s, the Adamson Trust was merged with the Cupar Sick Poor Nursing Association. A new cottage hospital was then opened at the current site at Bank Street, Cupar, in December 1904.

As well as Ogilvie, the Adamson refurbishment team included jmarchitects in Edinburgh; Turner and Townsend as project managers/lead consultant (as well as cost managers); Edinburgh and Glasgow-based RSP Consulting Engineers; and the Glasgow office of consultancy Grontmij, acting as structural engineers.

Ogilvie Construction, part of the Ogilvie Group is one of the leading building firms in Scotland. Headquartered in Stirling, it works throughout Scotland and North England. Further information is available at www.ogilvie.co.uk